To honor the awesome experience that was sharing each #AGFmoodMonday with all of you, we created a 2018 calendar with some of the images from all the topics:

To download and print this postcard-inspired calendar please click HERE. We recommend that you print it on card stock (texturised is a bonus) for better quality.

Thank you again for sharing things about your life and your story with us. We hope for our community to keep growing and to keep sharing.

The holiday season is filled with so many special moments, time with family, and gifts but with shopping, parties, and a myriad of things on our minds it’s easy to forget what this time is truly about. It’s time to be grateful for everything you have regardless of your circumstances. At AGF, we’re all extremely thankful to be part of such a supportive and creative community because you inspire us everyday to do what we love. Not to mention, that earlier this year we were overjoyed by all the love you shared with us during our quilt drive.

Between mid August and early September, Texas was hit by the devastating Hurricane Harvey. Many of the residents in Houston lost their homes due to the floods and till this day are trying to recover from the effects. During this time, the destruction was constantly on the news and everyone felt the need to help. Many organizations collected monetary donations, but we felt that this wasn’t enough. As makers, we believed that the victims needed to be comforted with love from quilts as a representation of their home. Hence, we partnered with Quilts of Compassion to host the #AGFcomfortsTexas quilt drive. 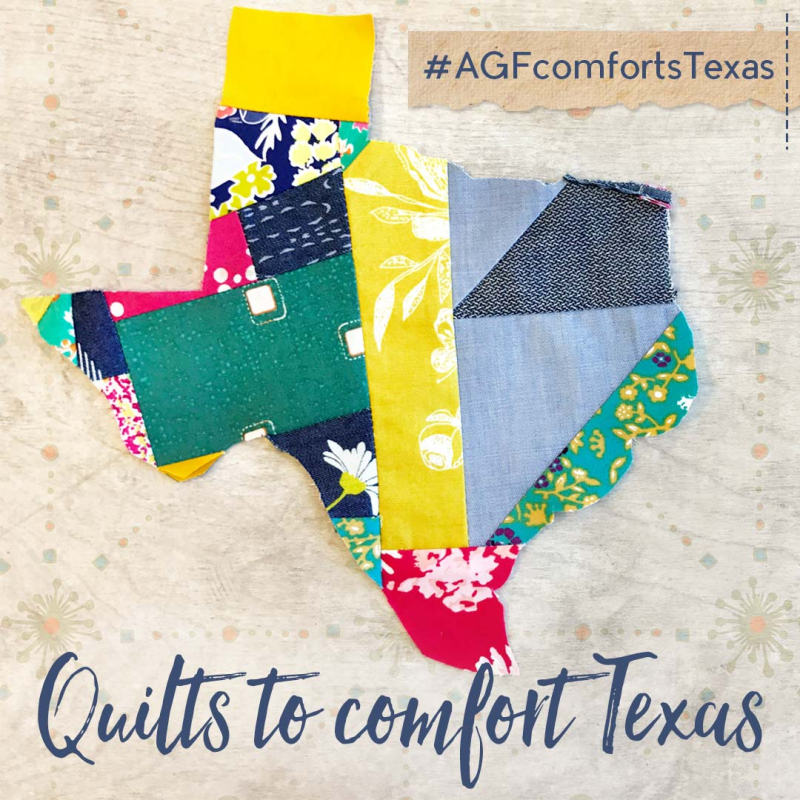 After researching many organizations, we felt the most connected to Quilts of Compassion because they are a non-profit organization that has been delivering quilts to disaster areas for over 15 years. The organization was scheduled to deploy quilts in November to ensure that the area of destruction was safe. From the moment we were notified the day of deployment the AGF quilt drive begun! 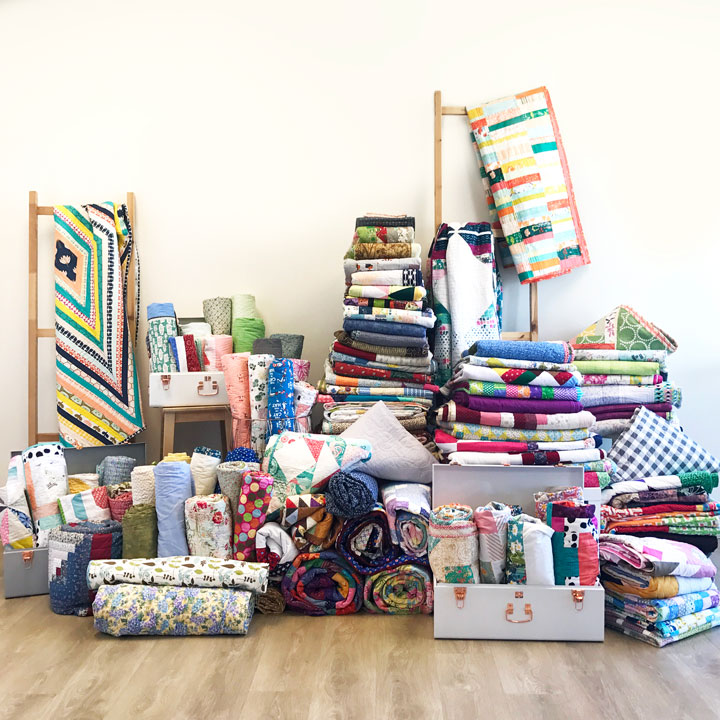 We collected quilts from September to October and we couldn’t be happier with the response. We received over 120 quilts from all over the world! It was truly humbling and exciting to see the quilting community come together to help others.

In gratitude for everyone’s generosity, we sent everyone who donated a quilt a little gift.  In addition, the team from Quilts of Compassion shared with us that everyone who received a quilt was overjoyed. 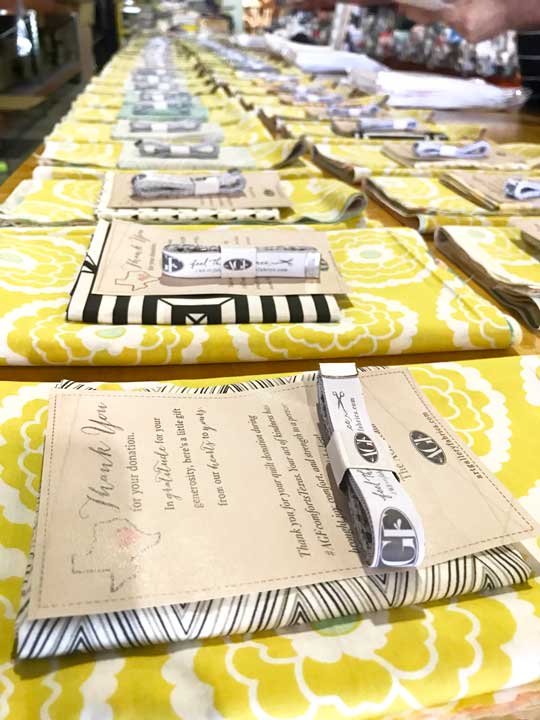 We hope that all the victims of Hurricane Harvey have recovered to normality and that we’re all able to love and help each other not just during difficult times. So this holiday season, hug your loved ones, wrap them in a quilt, and let everyone know how grateful you are to have them in your life.

Let's just face it, our lives are busy and the last thing we want to spend money and time on is shopping especially in the crazy holiday rush!  Which is why I decided to put together some great party dress patterns that are somewhat simple to make and will have you looking cute and confident for all your holiday events.

In need of some new ornaments for your tree this year? Instead of heading to the store this holiday season DIY some Quilty Holiday Ornaments by following along with our new tutorial up on the weallsew blog. We made our ornaments with AGF's first holiday fabric collection, Little Town fabrics! Which ornament is your favorite? It's hard to choose but I am really loving the tree with decorative stitches!

Want to get your hands on some winter fabric? We put together a fantastic bundle of fabrics to get you in the holiday spirit! Head over to the weallsew blog for a fabric bundle giveaway!

Have fun making these ornaments for you and for family and friends!

How’s everything? It’s insane how it’s already the ending of the year. Before 2017 comes to a close, I’m here to showcase three wonderful makers from a long overdue recap. At AGF we love partnering with quilt guilds and makers for different activities. So, from May to September we paired up with the Portland Modern Quilt Guild and our designer Sharon Holland to host the Bountiful Mini Quilt Challenge.

The participants were asked to create a “modern mini quilt” inspired by rustic elementsthat complement the homey and earthy feel of Bountiful fabrics by Sharon Holland. We provided 24 of the guild members 10 fat quarters from the collection and we let everyone’s creativity run free.

Here are some the mini’s from the participants: We were in awe by how creative makers got with their mini quilts. Choosing three winners was so difficult! But after long deliberation between the AGF team and Sharon we chose these three: 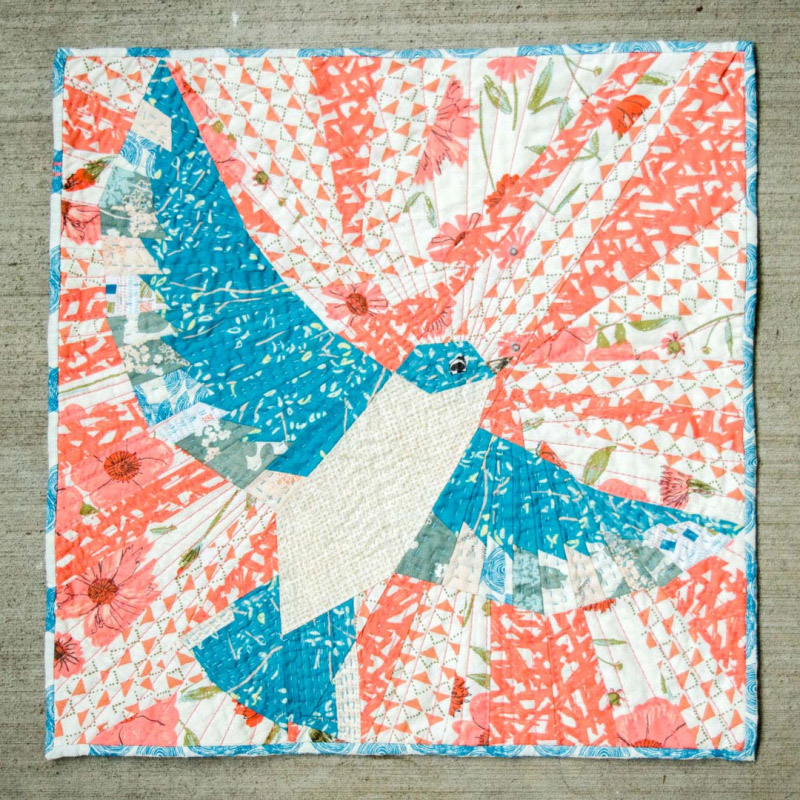 The detail in the foundation paper piecing is out of this world! Everyone agreed that this beautiful image of a bird made out of Bountiful fabrics was a winner. Check out Maddison’s story behind the quilt.

“When I read the details on the Bountiful fabric line, it immediately reminded me of summers spent on the Sandy River, sitting on the back porch of a cabin, listening to the river rush by while the birds flew between the trees. I really wanted to try creating my own foundation paper piecing. After sketching up several designs, I used the program Quilt Assistant to create my final pattern. Once it was pieced, I decided to hand quilt the bird (since I just had to give myself another new thing to learn), and then machine quilted radiating lines around it. My favorite aspect of the final mini quilt is the use of the letter G from the Art Gallery Fabric logo to create they eye of the bird”. 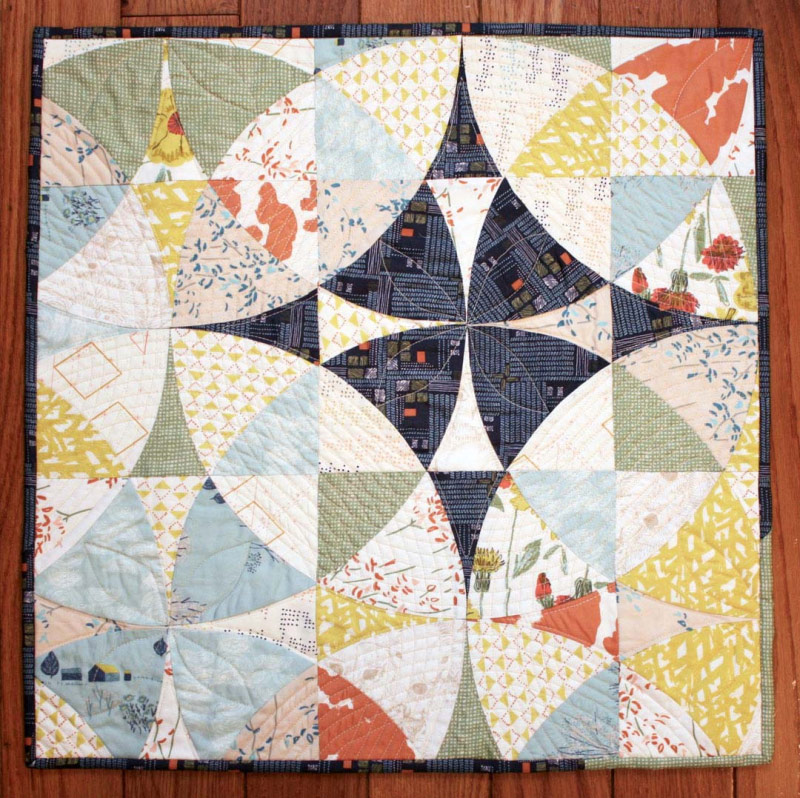 The curves in Kimberly’s mini had us completely mesmerized, not to mention that she used Bountiful in a contrasting way. This is what inspired Kimberly to make this quilt.

“I heard the word bountiful and saw the farm on the prints. It makes me think of overabundance, and with an overabundance of anything, I feel the need to share. Share with my family, my friends, my neighbors. I made a quilt of interconnecting circles because the more people we feel connected to, the more people we would want to "share the wealth" with. None of the circles in my quilt could exist without the other. Each relies on the piece next to it to be complete, just as people lean on each other. We are interdependent by necessity, and by choice”. This mini by Ruthie beautifully represents a windmill that’s commonly seen in vast fields. It really showed the essence of Sharon’s Bountiful collection. Take a look at what inspired Ruthie.

“I was inspired by the photos on the Pinterest board depicting distance and beautiful things growing. I pictured homesteads with windmills surrounded by fields of crops, and old barns and covered bridges with knotholes in the wood with sunlight streaming through them. The center of the mini is an appliquéd Dresden that represents the windmill placed on the coral that I see as wheat blowing in the wind. The partial Dresdens on the corners represent the covered bridges,

and most of the blades have cutout holes like old barn wood. I added a few fussy cut flowers, like wildflowers growing randomly, and the blue and green quarter square background triangles draw the eye towards the center like a dirt road running towards the horizon”.

I hope you’ve gotten inspired by the beautiful mini quilts that were made for this challenge. To read more about it, check out the Portland Modern Quilt Guild’s website. Feel free to let me know which mini quilt you liked the most and what are some of the activities your local modern quilt guild hosts.

How to make a SeeSaw Quilt Block Tutorial

Do you have a favorite go to quilt block? Pinwheel blocks are one of my favorite blocks! The SeeSaw block is the new addition to the AGF Quilt Block Collection which consists of a cute pinwheel center and flying geese at the edges. For this block I used one of AGF's new Fusion collections, Floralia  Fusions. The greens and pinks have me dreaming of spring time!

Watch the video below to give this cute block a try. Remember to post your quilt block creations on Instagram with the #AGFQuiltBlockCollection to be enter to win our monthly fabric bundle giveaway!