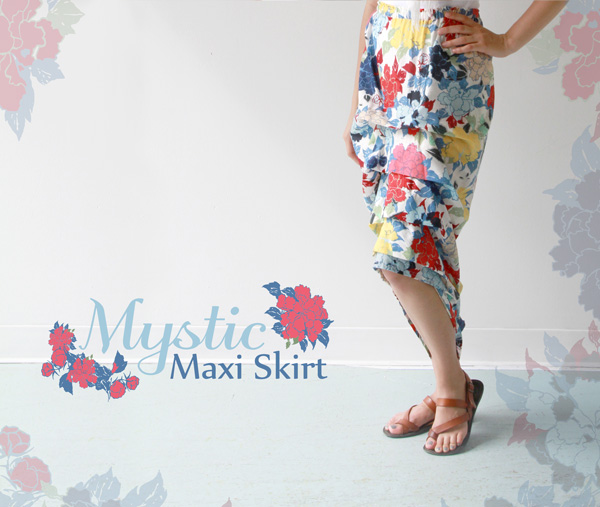 Hello! I hope everyone has had an amazing week and start to the month. Autumn also officially started about one week ago, but we can still feel traces of the very hot summer that 2013 brought us (especially here in Miami). To welcome my favourite season but give a farewell good-bye to Summer* I created (with the help of Kelly) a transitional skirt tutorial: The Mystic Maxi Skirt.

*For our friends in the Southern hemisphere this can work from cold to hot as well :)

What I love about the transition of these seasons is that it is still warm but you can feel the breeze, and it becomes the perfect weather to layer with soft and light fabrics. Our voile fabrics are perfect for this, the hand is so soft and the drape is so beautiful that I had to use one of them for this tutorial, especially since we incorporated pleats to add character and a touch of uniqueness.

This skirt is a transitional piece because depending on the styling it can work perfectly for both Summer and Autumn. During the hotter time, wear it with a cami and sandals. As the temperature drops, add a jacket, a scarf and booties, and warm everyone around you with this happy floral. 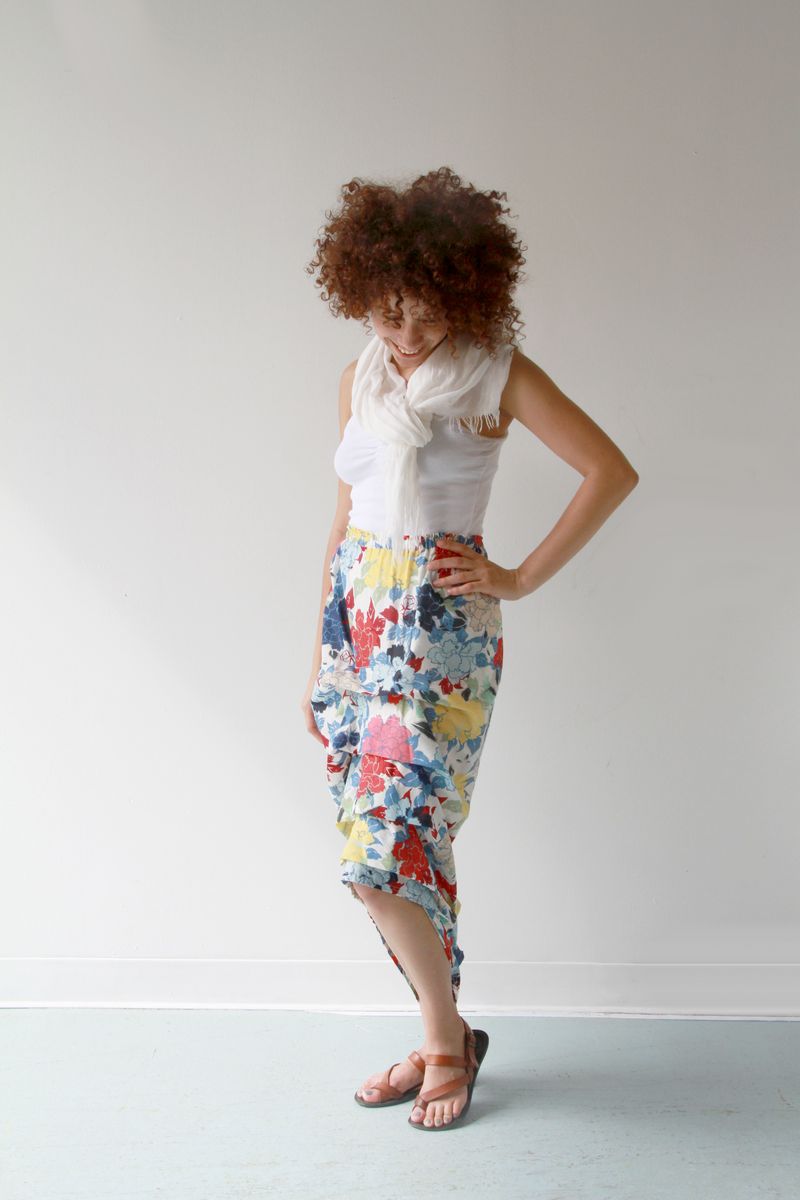 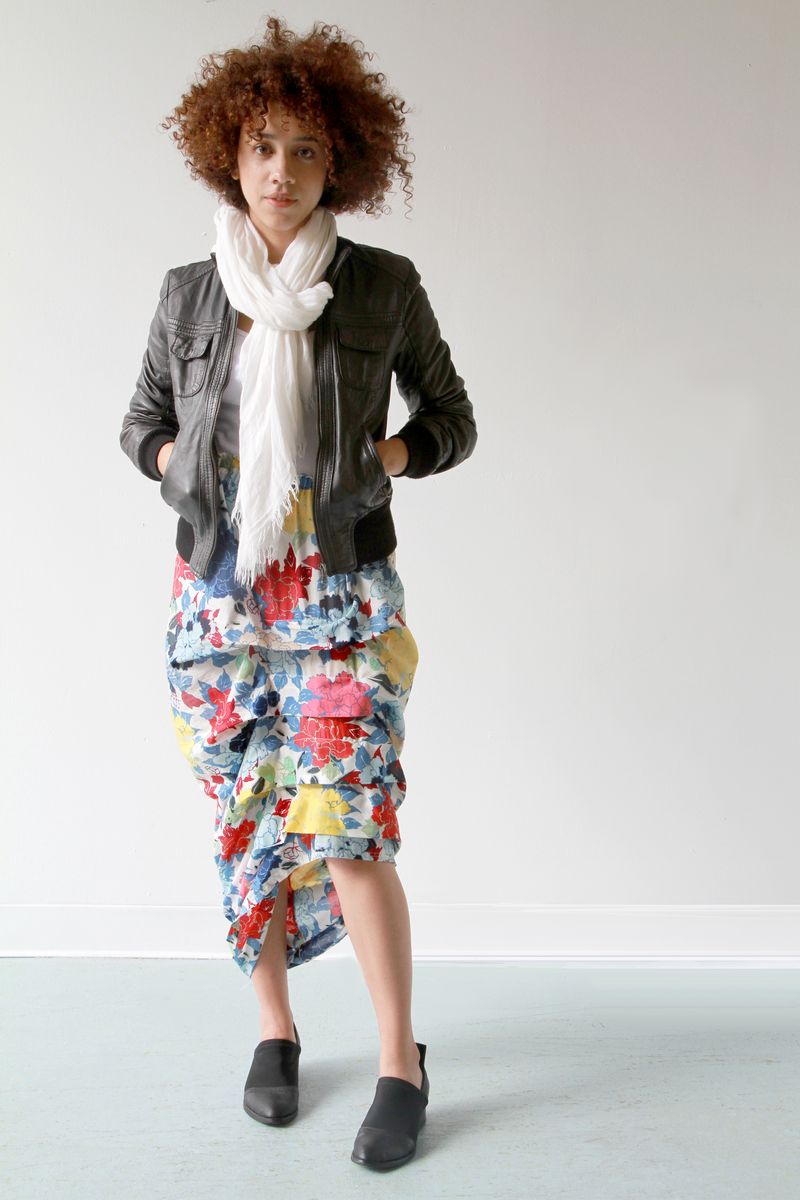 Here is what you will need:

The measurements we're using are equivalent to a small size, which is Lorena's (our model) size. To get started, let’s cut a rectangle. To get the width, measure around the hip and add 3½” (we are using a 45” measurement for this skirt). For the length, measure from the waist to your desired length and add 4” (ours is 55”). Now measure your hip again and cut a strip of elastic that can stretch to that measurement plus a little bit more for extra comfort (we used a 25" strip).

To start we are going to close the skirt by sewing along the long edges together. 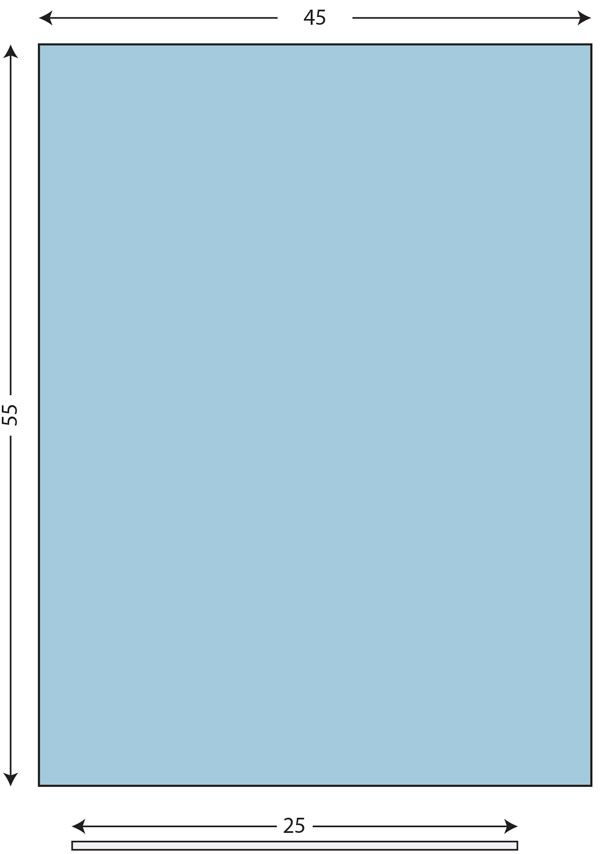 Now, fold the top of the fabric ½” in and iron it. Fold it again ½” press and sew all the way around to create a waistband (don’t forget to leave an opening to insert your elastic). With a safety pin, thread the elastic in through the opening and sew both ends of the elastic together to finish the waist. Remember to stitch the opening of the waist band after you are done with the elastic. Do a top stitch on top of the elastic through the fabric so that it stays put and does not twist as you move. Hem the bottom of the skirt. 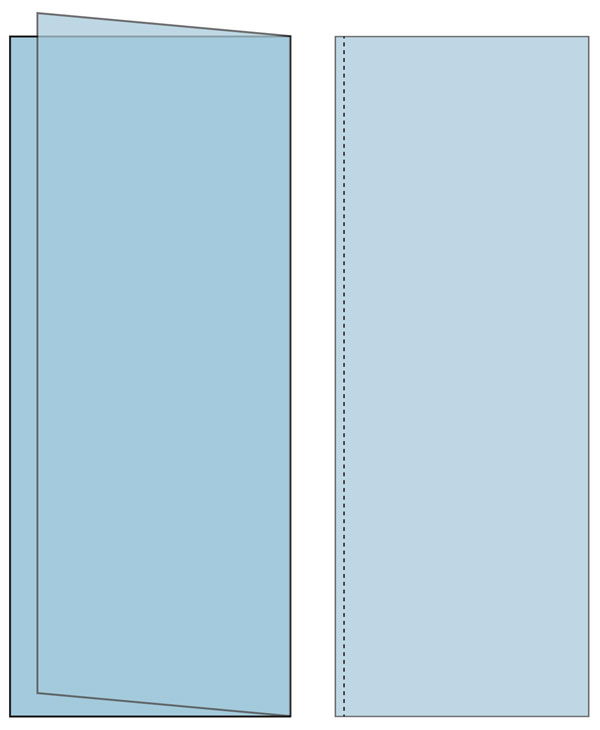 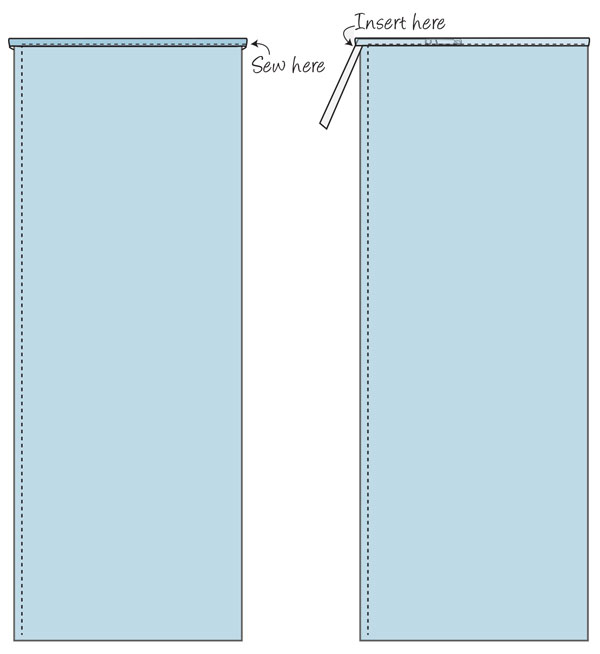 Now we will start to create the pleats in the front of the skirt (make them as even as you can). These pleats are going to be 6” wide horizontal pleats. Starting from the top, measure 11” down and make a mark using an air erasable marker, then measure from that mark 6” down and matching those two marks you will make your first pleat, pin it.

Then measure and mark 3” down and below that mark measure and mark 6” down to
create the second pleat. Continue measuring 3” and 6” down to create the other pleats. You can make as many as you want. We ended up with four pleats. Pin and press each pleat in place. Sew the pleats horizontally 6” and you are done. 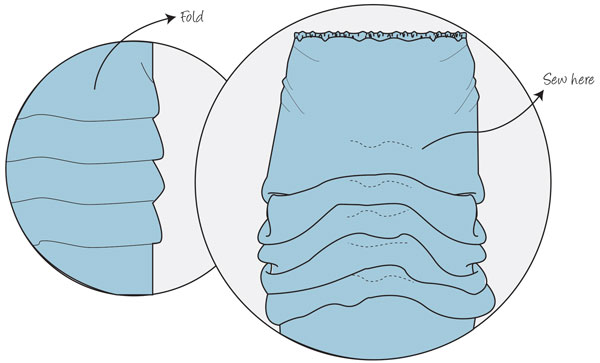 Now wear this stylish skirt and celebrate all seasons! 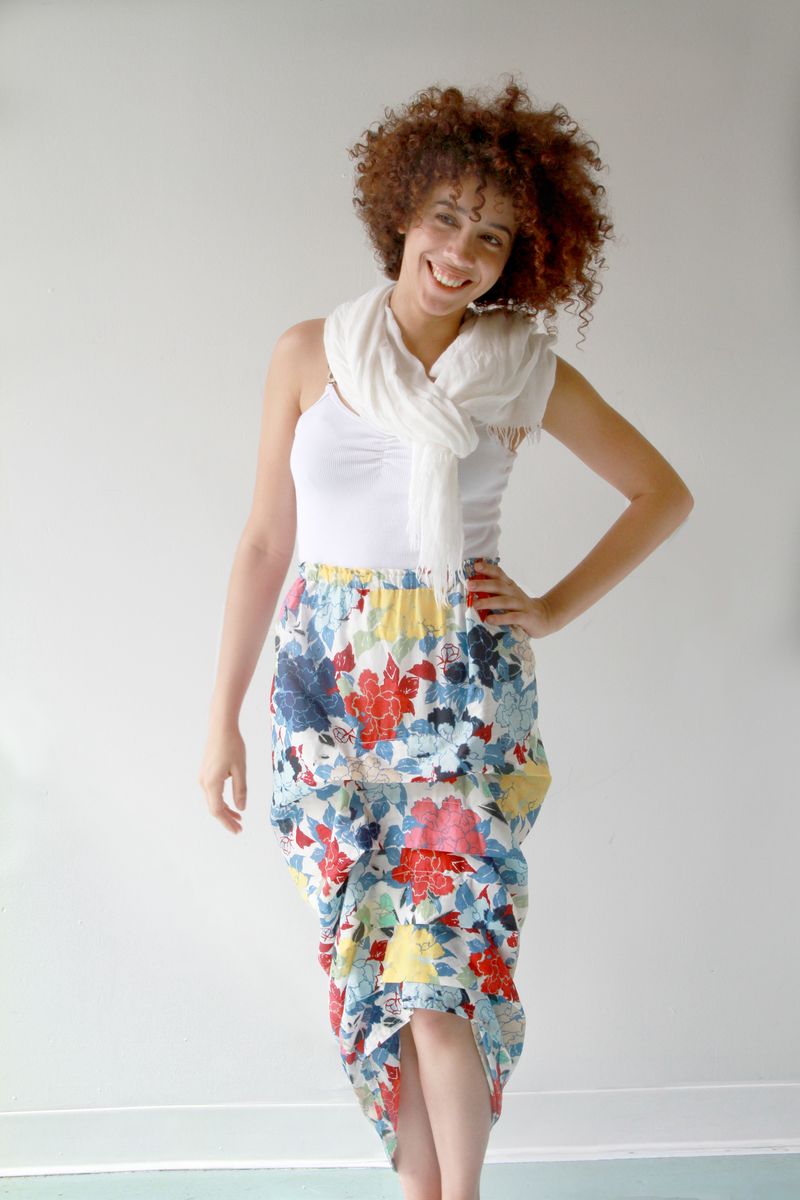 Ok, so maybe we've gone a little mad around these parts; what with our running wildly in preparation for quilt market, working around the clock for timely arrival of upcoming collections, sewing, designing, painting.. heck--even decoupaging. A stitch or two have come undone, and we're giving away fabric on a scale larger than ever before. Bundles and bundles of it!

This giveaway is a little different in that it takes place solely on Instagram. If you don't follow us there yet, now's the time because we want to reward you for it! 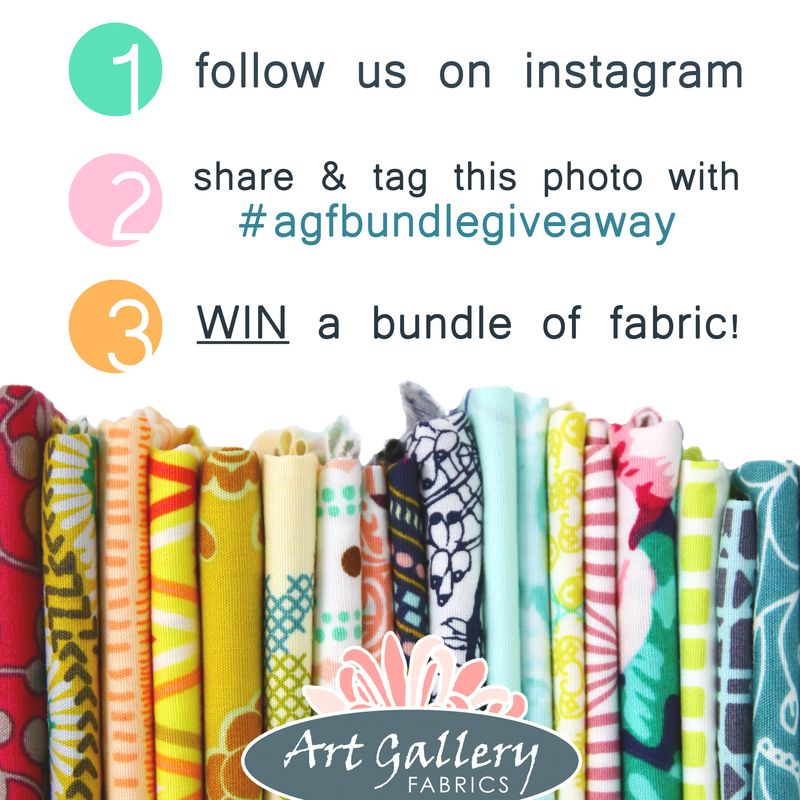 So to break it down just a wee bit more: simply follow us at @artgalleryfabrics, grab the photo above, instagram it, and tag it with #agfbundlegiveaway.

Alternatively, you can head over to our instagram page, get a screen capture of the photo with your phone and share it on your instagram. Either way you choose to do it is fine by us!

- Once a week we'll choose two winners at random from our instagram followers (ongoing and new).

- Each winner will receive an assorted fat quarter bundle of fabrics!

- Keep your eyes peeled for the mention of your handle (username) because we'll announce it first through instagram.

- Spreading the word is encouraged!

So let's get started! We want to see this photo spread wildly through the month of October. We get tons more nice people to interact with on our instagram page, and you get a chance to receive fabric without spending a penny!

If you have any questions at all about entering, please leave them in the comments below. Thanks everyone! 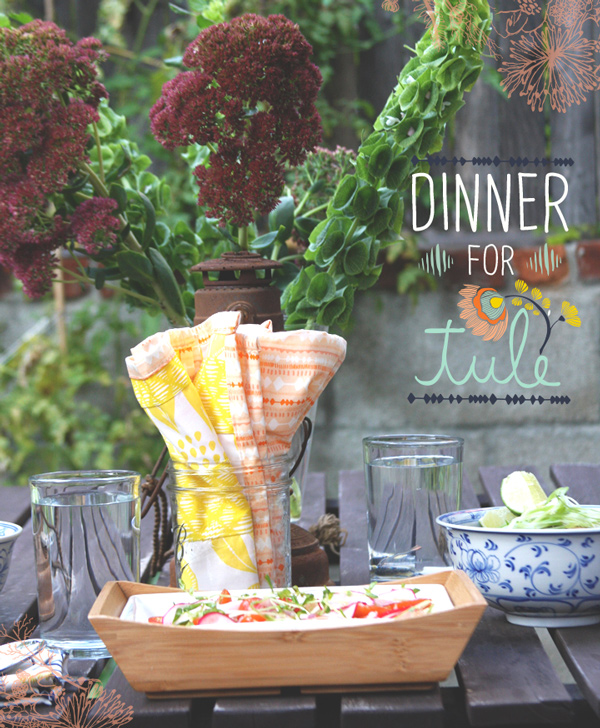 We’ve got a tutorial for you today courtesy of our very own Leah Duncan! We love these simple napkins she’s done for us because they don’t take up massive chunks of your time, and they’re a great alternative to using disposable napkins.

Let’s get started with Leah...

Hi Guys! If you're like me, just having the time to sit down and sew is a battle. I'm always looking for quick and easy sewing projects and napkins are a go-to favorite. They're cute and spruce up my table even if it's just myself and my husband sitting down for lunch. You'll be able to complete this set of 4 reversible striped napkins in 1-2 hours tops.

Let’s begin with the fabrics types and amounts you’ll need: 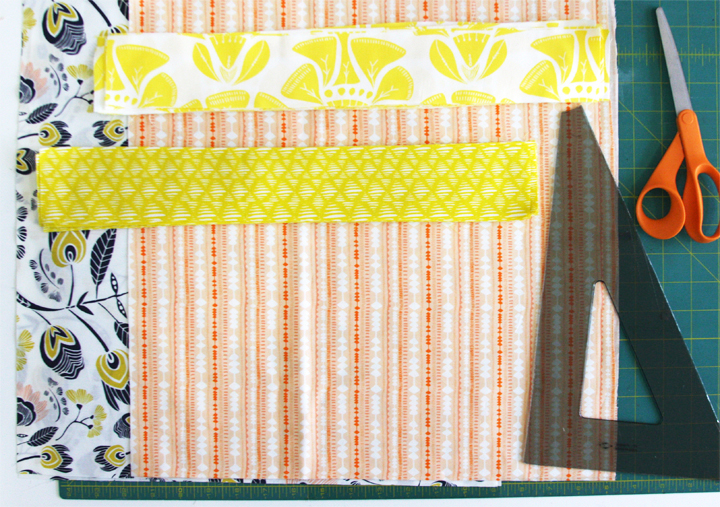 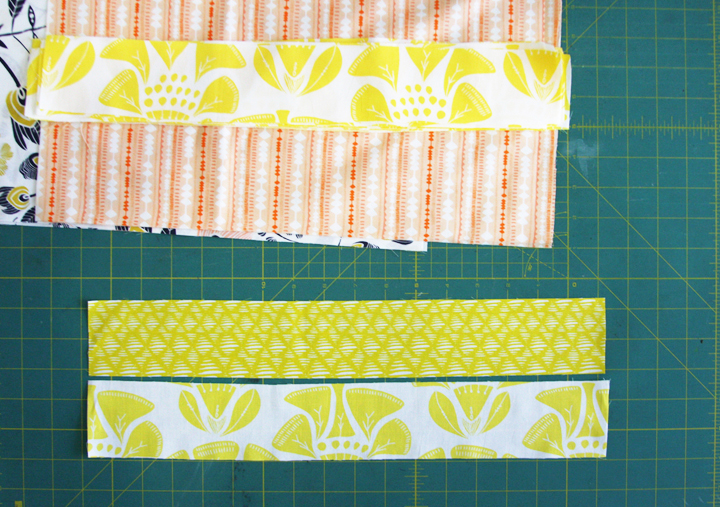 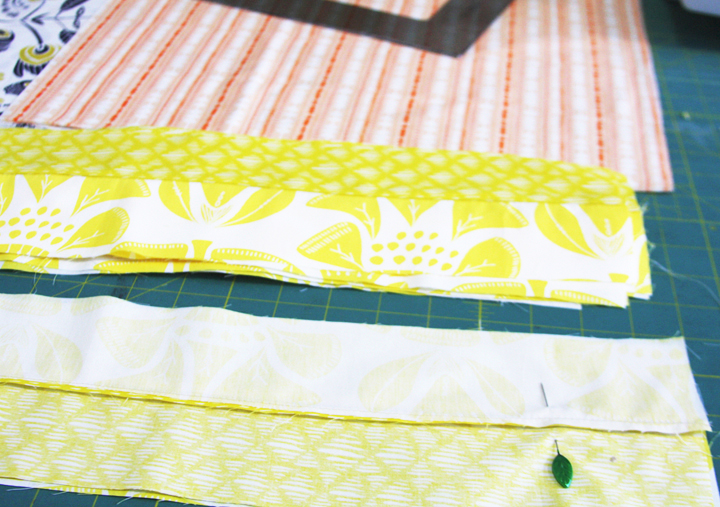 3. Repeat by sewing these pieces together. Press seams. You'll have 4 finished 17" squares with 4 strips of each fabric. 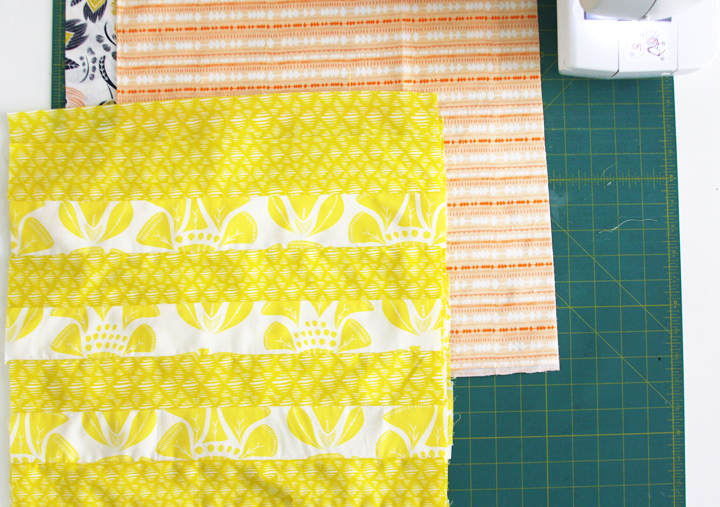 5. Do the same for the remaining sides.

6. Sew each side using your sewing machine and be sure to tuck in any raw edges. 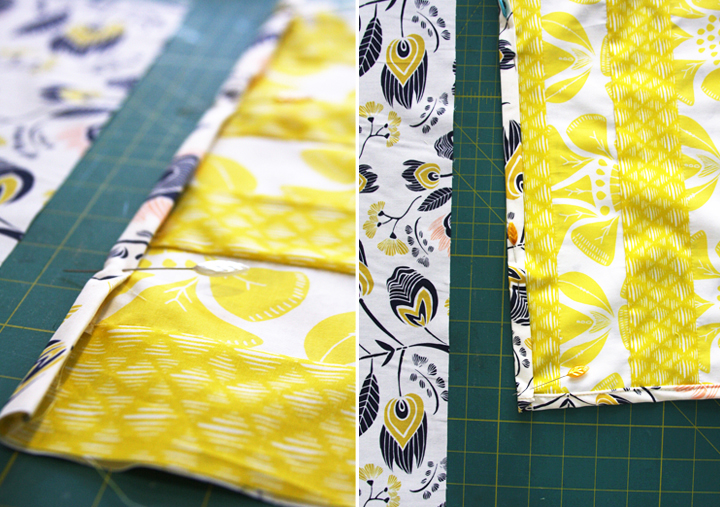 7. Repeat for the rest of your napkins! 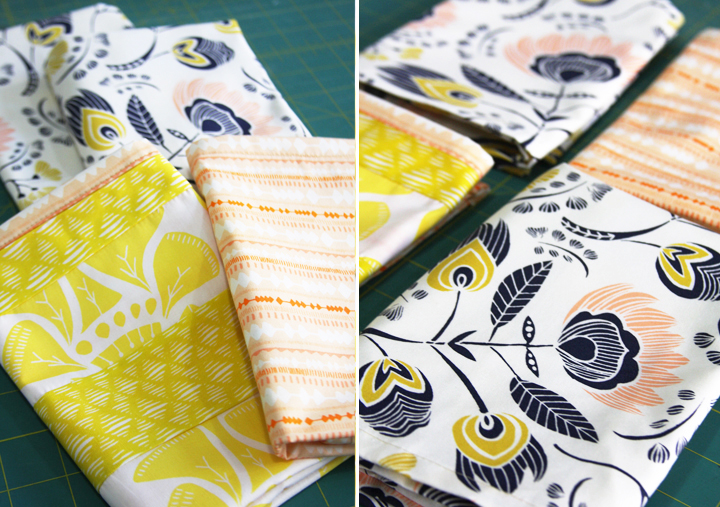 Easy as pie and you'll be saving a few trees in the process with your cloth napkins! Display either side of the napkin depending on your table setting or the occasion. 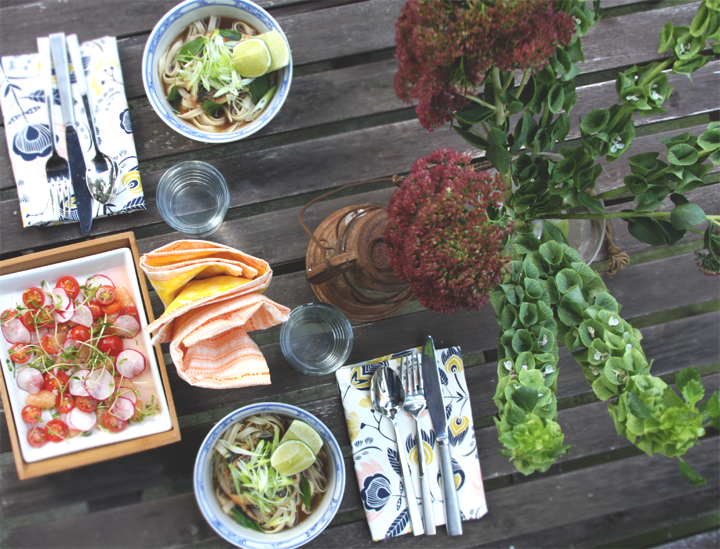 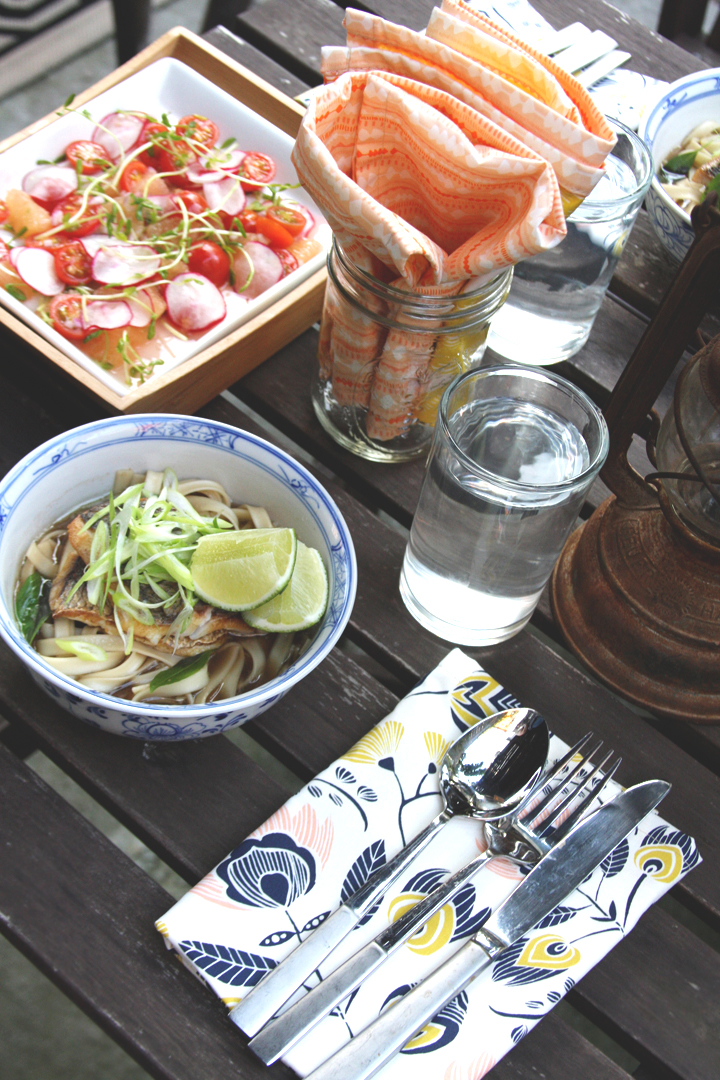 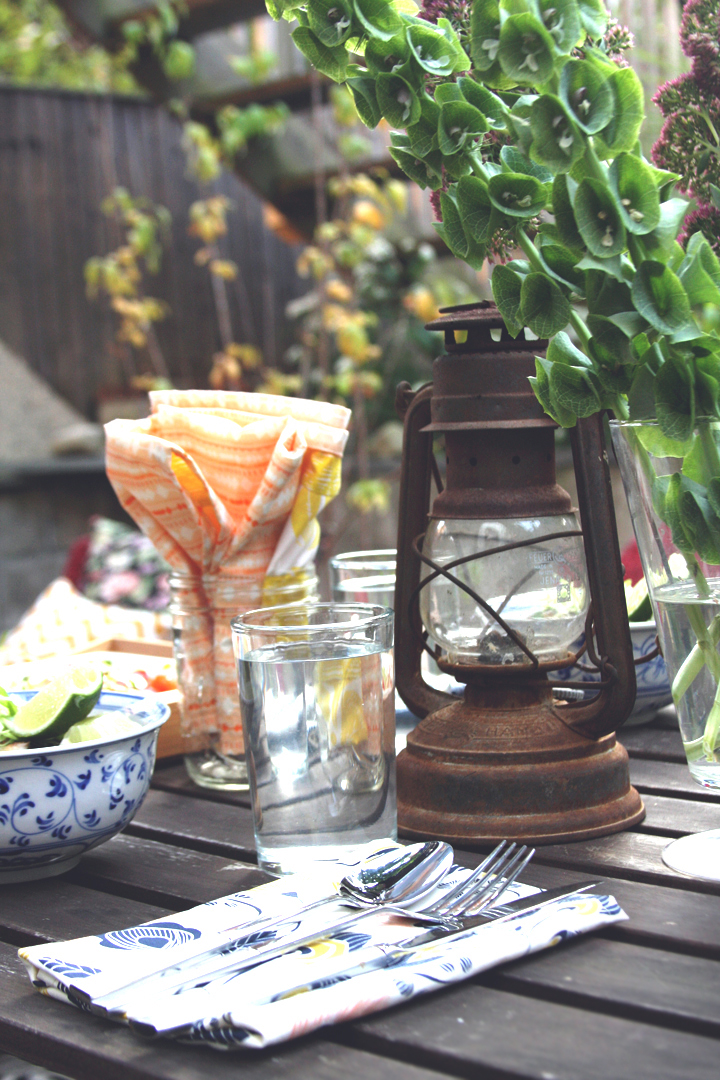 Alternatively, you may find this tutorial over at Leah's blog, freshly chopped.

Thanks to Leah for the beautiful setting and photos. 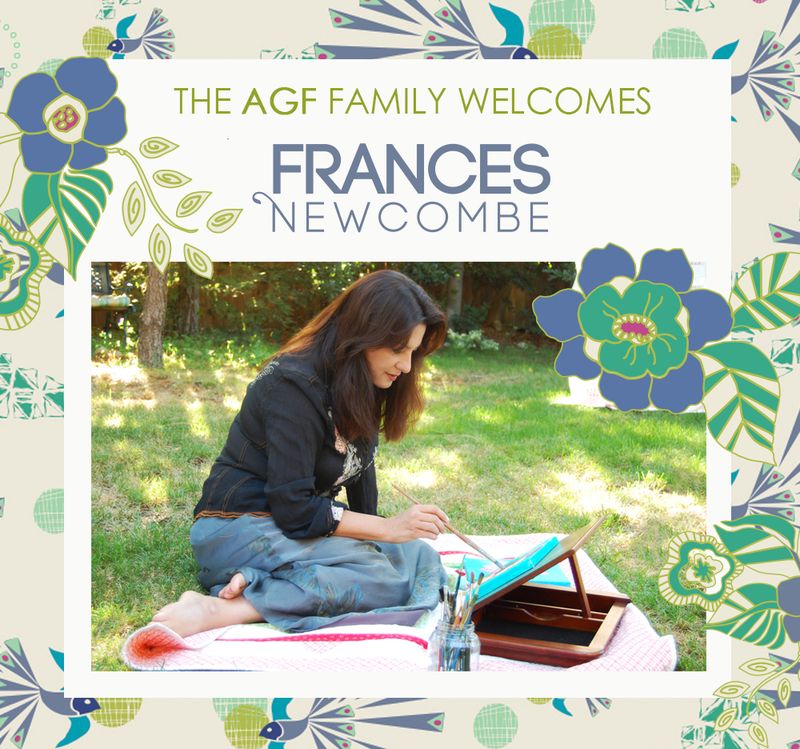 “Fabric design is a different form of story telling. With each choice the designer makes, they are telling a unique story. In turn, the quilter will rearrange those fabrics to tell their own story.” - Frances Newcombe 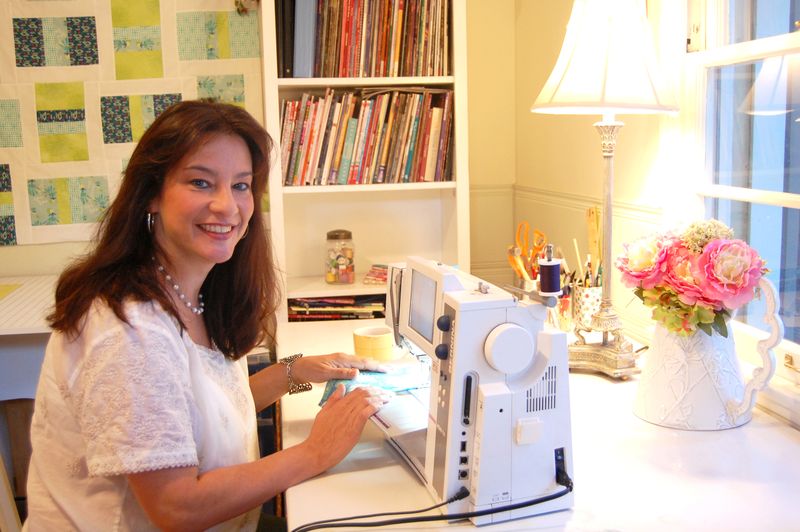 I have loved fabrics and sewing for as long as I can remember. When I was 6 years old, I snuck into my mom's closet with a pair of scissors and cut up one of her shimmering evening gowns to make doll dresses. When I was in the 9th grade I took up a sewing class and was hooked for life.

I grew up in Los Angeles in the shadow of the film industry. My father has been a film composer for over 50 years. In many ways, sewing was an escape to a simpler life from the high-pressure world of show business.

After I graduated from the Rhode Island School of Design with a BFA in illustration, I returned home and began working in Broadcast Design for television. For over twenty years I have created on-air graphics, promos, and main titles for the Discovery Channel, TLC, E! Entertainment, Buena Vista Television, as well as all the major networks, CBS, ABC and NBC where I currently work.

After getting married, my husband and I moved to the foothills area above Los Angeles. It was there I discovered a wonderful local quilt shop. This rekindled my passion for sewing and quilting and I began collecting all kinds of fabrics. 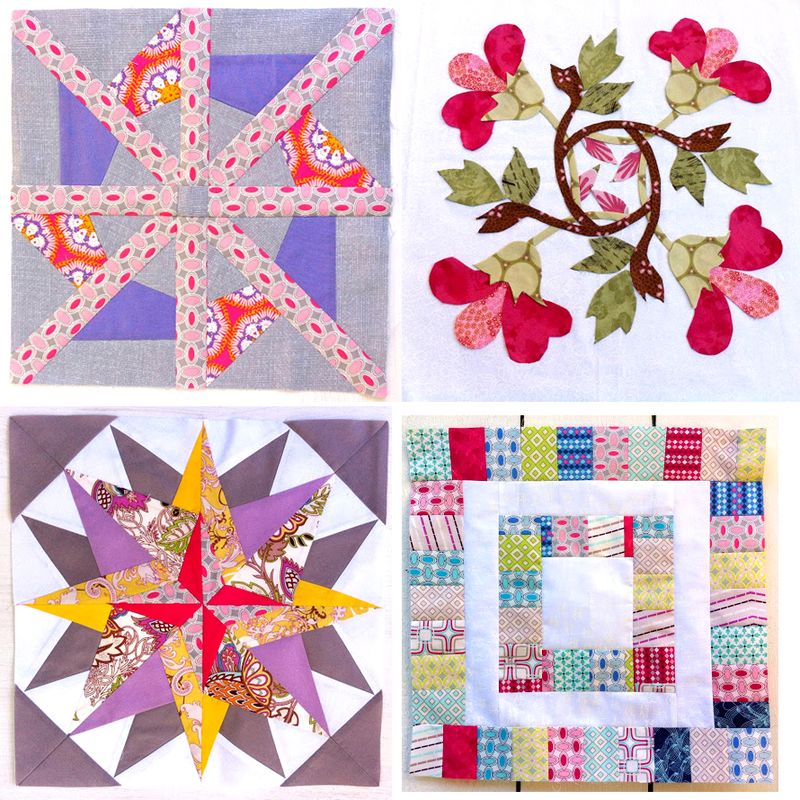 For me, fabric design is the synthesis of every aspect of my life: sewing, painting, graphic design, collage and ultimately story-telling.  Fabric design is simply another form of story telling. A good story causes us to escape our world for a moment – only to bring us back to it with a greater understanding of it, and hopefully helps us to live love and appreciate it more. 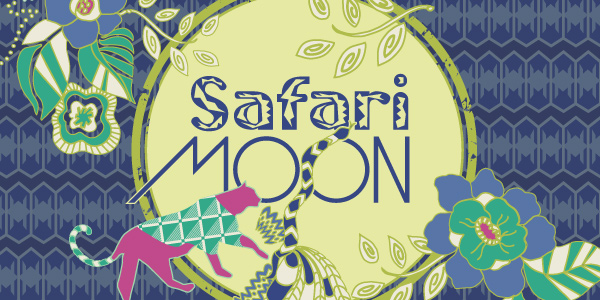 This fabric collection touches the adventurer in all of us. The feeling of exploring the African plains has been captured with sunsets, animal and plant life motifs. Safari Moon shines among other fabric collections through its incredibly rich colors and exotic designs. Take your quilts, garments and accessories up one level of lushness with Frances Newcombe's new set of fabrics.

Join Art Gallery Fabrics & Frances Newcombe during a Twitter chat today--first from 1-3PM EST (get in on the conversation using hashtag #talknt) and at 9-11PM EST (use hashtag #talknt2). Frances will be answering your questions and telling you a bit more about her new role as fabric designer for AGF! Additional details here.


Moreover, participants of the Twitter chat will be entered to win a FQ bundle of Safari Moon before it becomes available to the general public in mid-December. How amazing is that!? We look forward to having you there!
Find Frances throughout the web:
Blog
Twitter
Pinterest
& view her official page at the AGF website.