I would love if you start getting to know my family a little bit....

He is enjoying summer vacations, and this photo brings back so many beautiful memories to my mind... I'm so proud of my son :)

This picture was at our house in New York. See yah! 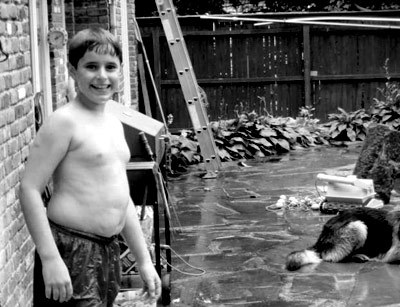 My love affair with sewing...

My love for sewing I think that it is inside me from before I was born. I have it in my genes. My grandmother was a sewer, and also my mom. I come from an Italian family on my mother's side, and Spaniard on my father's side. My four grandparents emigrated to Argentina at the beginning of last century. They suffered very much in those countries in that epoch, due to the conditions in which Europe was. To be more precise, my maternal Italian grandfather fought in the First World War (what an admiration that I still feel for him!!). Both of my mother's and father's parents met in Argentina and married, and after my parents were born, inculcated them during their life that one person should always love the country in which was born, but also the country where one emigrates. This last one is the most important because it gives you everything once you adopted it. They learned this lesson very well and they passed on me, although they never imaginated that I was going to move to another country in the future!! My parents married and I was born in Buenos Aires, one dawn of December 30, 1961 (I am Capricorn, yeahhhhhh) This is a picture of my mom, my first dog and me. 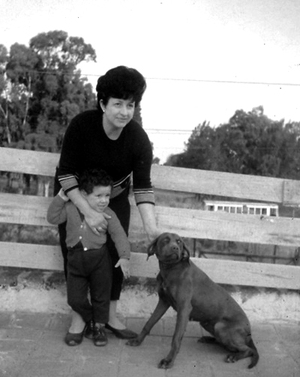 From a little girl I was used to see lots of fabrics, sewing needles, yarns, thimbles and other materials and tools around me. At the age of five I made my first stitches by hand, and at nine I was already seated at the ancient sewing machine of my mom. Do you remember the ones with pedal? I loved it!! When I became 13 years old I took a seamstress course in the famous Academy Delego & Lagarrigue, one of the most important of Argentina. It lasted 3 years, and this way I fell more in love with sewing. At high school they were giving us classes of sewing and knitting by hand too. The years passed, and when I finished high school I started law college and little after that I began to take some painting classes.

Since you will imagine, I was loving design; I was feeling fascinated by all the opportunities that it was offering me to express my creativity. After three years, I dropped law. At the same moment I met the one that was going to be my dear husband, Walter Bravo. We both had 19 years at that time. We get married at 23, and when we were 27 came the possibility of sending my husband as a manager of an Argentine company of leather jackets (where he was working) that had been set here. This way it began my wonderful adventure in this country to which I love so much and gave me everything that I have.